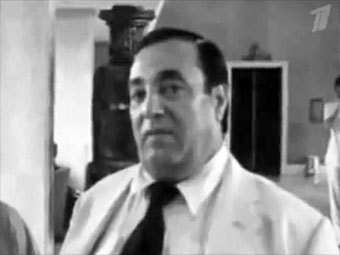 Mobster boss Aslan Usoya, known as “Grandpa Hasan,” was shot to death after leaving a resturant in Moscow.

One of Russia’s most notorious reputed mobsters was gunned down in the middle of Moscow on Wednesday in what appears to be a contract killing, police said.

Aslan Usoyan better known as “Ded Hasan” (Grandpa Hasan) was shot while leaving a restaurant in central Moscow, Russian state media reported. A woman passerby was also hit and is expected to survive.

Hasan was struck by a bullet from a high powered automatic rifle issued to Russian special forces, police said. The bullets came from a building across the street and shell casings were found scattered near the scene.

Hasan, an ethnic Kurd born in neighboring Georgia, presided over a massive criminal empire stretching across the former Soviet Union, trafficking drugs and weapons. He also owned businesses and casinos across the region.

Hasan was locked in a violent and bloody battle with another mobster, Tariel Oniani, the Guardian reports.

The two mob chiefs were fighting over territory and building contracts at a lucrative construction project in the Black Sea town of Sochi, which will host the Winter Olympics in 2014.

Usoyan was a member of Russia’s notorious thieves-in-law, or vory v zakone, according to Georgia News TV. Members sport elaborate tattoos and follow unwritten prison laws passed down through the years from gulags (Soviet prisons).

The assassination was “probably the result of Aslan Usoyan’s conflict with ‘thieves in law’ clans headed by immigrants from Georgia,” a source told Interfax.

Hasan had previously survived an assassination attempt in 2010, the Guardian reported.

Keep Up With Anatoly